I’ve had way too many in my lifetime – Jerms, Germ, J-Dawg, J-Flex, J-Money, Howard, Howie, Hoppa, Yourmeaho (that is my Hebrew name…I butchered the spelling), Jezza, J-How, and probably lots more behind my back.  Quite frankly, I love them, all of them.  Each one holds a special place in my heart.  Even my brother’s nickname for my serve in tennis “the Jeremy serve” is special to me.  If only because I know it comes from a place of jealousy, because we both know my serve is superior to his.  But it’s not really his fault he is only 5’5, yet I digress.  Here are some of my favorite nicknames and the backstory…

#1 – “GAR” Really the impetus for this entire post, calling one of our friends Gar is pretty much my favorite thing to do, ever.  Holiday party, 2006.  Nice little get together, probably about 25 people or so at the peak.  I may or may not have fed one of our friends, who I’ll call Linda, a bit too much red wine (Ed & Sarah, I do apologize for bringing red wine to your white carpeted apartment, I never got that memo).  Well, towards the end of the night Linda’s brother spotted her from outside making out pretty effing heavily with a friends little brother.  Appropriately, he screamed, “GET A ROOM”.  Hence, Gar.  We still call her that.  In fact, a postscript to the story is at a hungover brunch about a year ago, a friend of the family thought Linda’s mom should know why we call her Gar.  Great stuff.

#2 “Sophistication Station” At summer camp about a decade ago, one of our friends was a few years our elder, and thus a few years wiser.  There is no way he was more sophisticated though.  I think we were going for that ironical thing, like when a 6’7 350 pound dude gets called “Tiny.” Anyway, he did quite well with the ladies that summer, hence the nickname.

#3 – “Ian”  Not a nickname, I know.  About 8 or 9 summers ago our camp staff all got some soccer t-shirts made, and we all could pick our own name for the back.  I chose “Maverick,” since Top Gun was a big movie that summer and Tom Cruise was not yet a crazy scientologist.  Of course there was “Station”.  One of our friends, named Ian, went with “Ian.”  Not very clever.  But at least he finally made the blog.

#4 – “J-Flex” – One of my many nicknames.  Look at that picture, that is my bicep…need I explain any further?

My mom always said that nicknames meant you were well liked. This theory arose coincidentally around the time I was dubbed “sniffer” and I have a sneaking suspicion they might be related. My nicknames included Fire, Snifter, Brandy Snifter, and Kid Sister. I’m sure I’m forgetting some.

I tried to drop my lifelong nickname freshman year in college. I had everyone calling me by my given name, the unused one typed in on my birth certificate, for two whole weeks. It seemed, and still does, like someone else’s name and going by it was kind of like stepping into someone else’s skin, albeit briefly. My brief flirtation with normalcy was cut short when my dad came to visit and let the cat out of the bag. I see people from elementary school who are surprised I still go by my nickname. One of them said, “I thought you’d have grown out of that by now.” It appears I have only grown more and more into it. 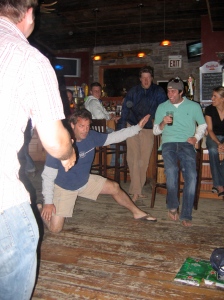 But if we are going to do a High Fidelity type list, as my co-writer is so fond of doing since everything seems to be rateable in his book, my favorite nicknames of the peer variety in no particular order are:

Log. One of my good friends was called Smokey after alerting the authorities to a fire. Since I was already called Fire, we got a kick out of the link. Our third friend, wanting to get in on the action, suggested we call her spark or flame. Smokey decided that no, Log was a much better idea. 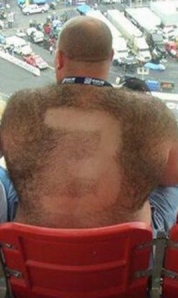 FurPud. A guy I knew, called Pud by all who knew him, moved out West and dropped the nickname in the move. When some friends came to visit him, he reminded them that they were not to call him Pud since he didn’t want it catching on out West. His Eastern friends discovered, however, that his Western friends called him Furball, due to his extensive body hair, and when they all got together, Pud/Furball became Furpud.

Pearsie. When I was growing up, my best friend’s parents called his brother Pearsie. They said it was because he had looked like a pear when he was born. It always struck me as incredibly sweet, maybe it was the way they said it, and I remember it fondly to this day.

Kat-breath. I don’t know this woman, she’s a friend of a friend. But all her friends call her this both behind her back and to her face. Seems a bit … too specific. I hope she’s not a close talker.

America’s Guest. He came. Sometimes invited. He bummed a ticket, invite or twenty off of you. He was adored, stayed too long and entertained everyone the whole evening. Again and again and again.