We had a Nintendo Gaming Console while I was growing up and there was a short span of time after I mistakenly skied through a fence while experimenting with exactly how much air I could get off of a jump and not focusing enough on direction in relation to that air, when I had two broken wrists.  Suddenly, since I couldn’t do much of anything other than work the NEC controller, I was playing a lot of Super Mario Brothers and actually had enough free time and limited enough mobility to invest the time into finding all the secret hidden stuff in the levels.  It was during this period of time that I also discovered that I can move six of my ten toes independently of the others, which is always a fun party trick.  Anyway, other than that short foray into video games, I haven’t spent much time playing, and I was bored by my friends who were enamored with them.

So when my 55 year old friend brought Guitar Hero, that she had confiscated from her son as a disciplinary measure, to a hockey tournament, I wasn’t excited.  Still wasn’t excited when the rave reviews were pouring out later that night at dinner.  Once I found out there was beer in her room, I found myself watching two friends duel it out.

To say I was hooked on Guitar Hero would be an understatement.  I was like Keith Richards with his first 8 ball, Angelina Jolie in an unsupervised orphanage, Buster Bluth with access to juice.

But it was just for a weekend.  I returned home to my video-game-free house and that was it.  I quit cold turkey.

Until I discovered Rock Band.

Rock Band has two guitars AND drums AND vocals.  You are an entire band (minus keyboards, the horn section, tambourine and the back up singers, but a band nonetheless).  A band that can support each other, bring dismissed players back into the fold by stepping up the energy level of performance, and work together for the greater good: seriously rocking out.

For a few brief moments, or an entire evening, my mediocrely musically inclined friends and I can get lost in the dream of our youth.  Because let’s be real, although we might not have had Tiger Beat mug shots lining our walls (it wasn’t out yet), we all either crushed on, or wanted to be, a rock star.

I still don’t own a video game,but I’m hooked, more so than my cheap tryst with Guitar Hero and I have found myself googling Rock Band … just to window shop.  I would probably have to get a bigger TV, or at least one that you could see something on from 6 feet away, so I build that into the expense.  And so far that’s kept me from purchasing the entire package.  But I still dream about it.

First off, let me get this straight – you had two broken wrists but decided the only thing you could do was consume your time with an activity that requires movement from only your wrists, hands and fingers?  I’m not calling bullshit or anything, but as someone who played plenty of video games growing up, I know first hand (shitty pun) that it takes all these parts in good working order to really delve into a game as complex as Super Mario Bros.

Anyway, that’s besides the point.  Rock Band is the point.  And Rock Band is fucking lame.  I played all sorts of video games growing up, through college, and even my first year out of college.  Sound somewhat lame? Of course, but just take into account that I spent my first post grad year in the depths of hell, AKA – working for a Minor League Baseball Team in Mobile, Alabama.  The  games I probably played the most are Super Marios Bros. when I was young, any form of John Madden Football or Mortal Kombat through my teens and college, and any form of Grand Theft Auto the end of college and after.

The beauty of these games was that they were all completely fiction.  Last I checked saving Princess Toadstool in Mushroom Kingdom, freezing someone then ripping their head and spine off, or gang banging on the streets of Padanaram were never really an option for me.  Football, a little more realistic, but three on three in someone’s backyard is not quite the same as using Barry Sanders to run for 1,000 yards in a single game.

I guess I got lost a little there in some childhood memories, but back to my point about Rock Band being fucking lame.  Instead of hitting a bunch of fake plastic buttons or durms , how about you go out and buy a starter drum set or a cheap guitar and play it for real?  It’s much cooler, and far more gratifying.  The only song I can still play on guitar all the way through is ‘Glycerine’ by Bush, and the joy that brings me is immense compared to the boredome created by hitting those plastic buttons. 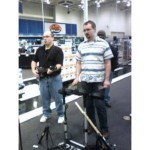 Last point – let’s say you are at a bar/party and you bring a girl back to your place, you are obviously going to hook up, but what are the chances you are getting laid? While it might be close, it’s probably not 100%.  Well, you increase those chances exponentially if you whip out an acoustic guitar and break into your cover of something like “The Scientist” by Coldplay.  But something tells me if you bring said girl back and offer her a rousing round of Rock Band, she will probably be reminded of douchebags she sees in Best Buy and hi-tail it out of there.